This is a text widget. The Text Widget allows you to add text or HTML to your sidebar. You can use a text widget to display text, links, images, HTML, or a combination of these. Edit them in the Widget section of the Customizer.
Follow SUCCULENTS AND MORE on WordPress.com

The genus Argyroderma from the Greek “Argyro” meaning silver and “derma” meaning skin, is one of the 4 genera in the family Mesembryanthemaceae.  Argyrodermas species  are endemic (found nowhere else) to the Knersvlakte.

The Knervslatke, a winter rain regime area with long dry summers, is located in the western part of South Africa, north of Vanrhynsdorp in southern Namaqualand (about  200 miles north of Cape Town).  This part of South Africa has an amazing variety of succulent plants. 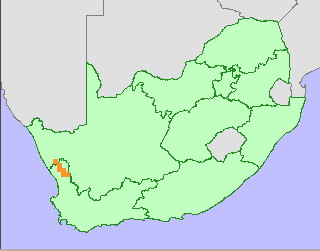 The Knervslatke in orange.  As you can see this is a relatively small area in South Africa (area in green). 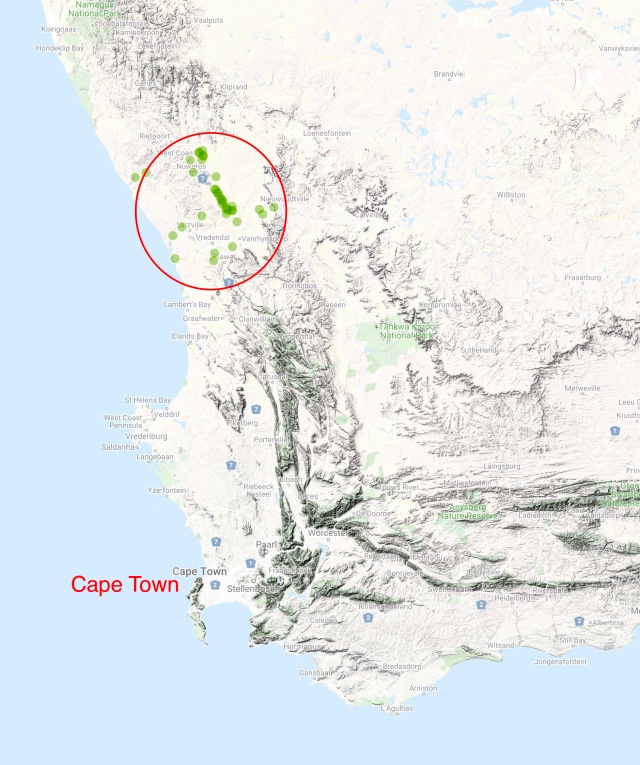 Map from registered observations of Argyroderma species in Inaturalist.  The Knersvlakte is inside the red circle.

Knersvlakte is a name thought to refer to the sounds you hear when you walk on the quartz pebbles, “Kners”in Afrikaans means  “grind” and vlakte means “flats”.

This picture shows the Knersvlakte as seen from the pass just below the town of Nieuwouldtville.  Light areas are the quartz pebbles.  Photo by Michael Douglas.

A distinct characteristic of the Knersvlakte is that the gently rolling hills are covered with white quartz pebbles.  It has been suggested that this helps the plant stay cooler since the white rocks reflect more sunlight.  Many of the plants found in this region have evolved to resemble the quartz pebbles and they camouflage very well.   Most plants are small and because many resemble pebbles from a distance, it is often difficult to see them unless they are blooming, you have a good eye to spot the small plants or unless you are practically standing on them.  The soils in this area are well-drained and have high salt content. 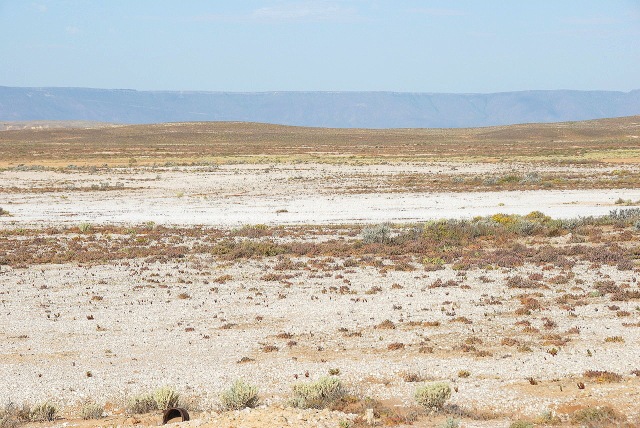 Once you get closer you can begin to see the quartz pebbles.

You get a little closer and look down and you may be standing on the plants without realizing they are not rocks.  Photo by Michael Douglas

Because the plants are small and growing among quartz pebbles, photography can be challenging.  Often knee pads and a tripod that can get low to the ground are required.

The genus Argyroderma consists of 12 species.  The plants are dwarf leaf-succulents that are single, or form tight round clusters.  The fused leaf pair lacks hairs and the waxy leaves are replaced every season.  During the dry season, the plants can become quite wrinkled. The flowers can be yellow, purple or almost red and white and they occur as a single flower. The plants bloom during the southern hemisphere fall or mid-winter. 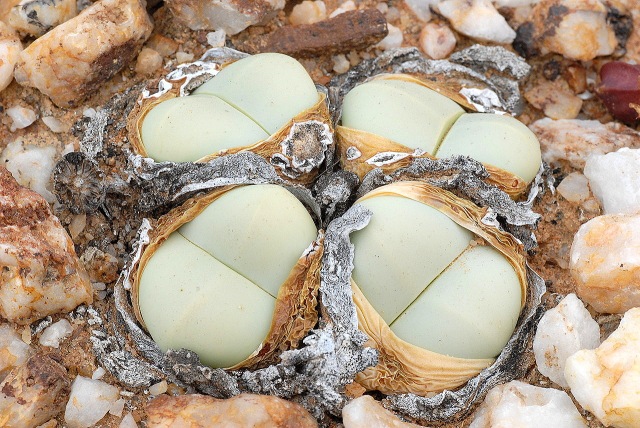 In cultivation plants need sunlight and water during the growing season (Fall and Winter in the US).  During our summers the plants look dead.  A sheath covers them making them look like bird droppings or a dead plant.  Once hydrated during the cooler time of the year a transformation occurs and the plants swell, turn green and are a sight to behold especially once they flower.

Succulents of South Africa: A guide to the regional diversity by Ernst Jaarsveld, Ben-Erik van Wyk and Gideon Smith.