This is a text widget. The Text Widget allows you to add text or HTML to your sidebar. You can use a text widget to display text, links, images, HTML, or a combination of these. Edit them in the Widget section of the Customizer.
Follow SUCCULENTS AND MORE on WordPress.com

The Linnaean system of classification

Have you ever wondered why scientific names are used (especially in writing) when referring to animals or plants?  Or, why we even need to have scientific names when there are so many common names we already use for plants and animals?

In the 18th century a Swiss naturalist, Carolus Linnaeus, created the binomial system for classifying living things.  For this reason Linnaeus is considered the father of taxonomy – the classification of organisms.

Latin  being a “dead” language – minimizing any possible changes overtime, was Linnaeus’s language of choice for naming organisms. 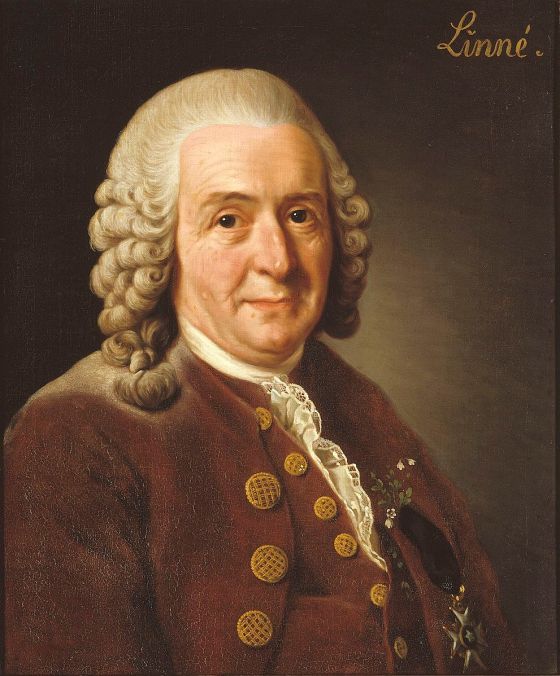 The binomial system of classification was needed to avoid the confusion created by the existence of many common names for the same organism (plant or animal).  A major disadvantage of common names is that they are not universal since they are inherent to the native language of the person using them.  Moreover, most plants and animals have many common names yet uncommon organisms may not have a common name at all.

There are many rules associated with naming a new species that we will not discuss here, but we will mention some basic rules to keep in mind when writing scientific names.  These include  1) scientific names have two parts (a genus and a species), 2) both genus and species are italicized, 3) the genus is always capitalized but the species is not and the plural for genus is genera.

The basic Linnaean binomial system of classification looks like this: 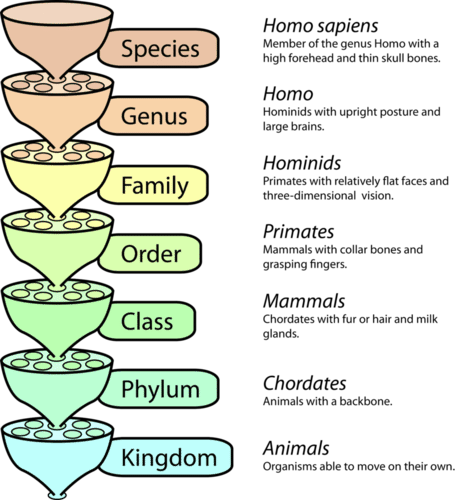 Taxonomy is a changing science and as new knowledge is acquired changes to the original system of classification are needed.  Linnaeus  originally recognized three kingdoms: Plants, Animals and minerals.  In 1990 the addition of the term “domain” to the original classification system was proposed (Woese et.al.,1990).  The three-domain system divides cellular life forms into archaea which are single-celled microorganisms with no cell nucleus (prokaryotes), bacteria (a type of  biological cell with a nucleus (Eukaryot)  and eukarya (organisms whose cells have a nucleus enclosed within membranes) (Wikipedia).

A more “current” classification scheme (using the added concept of domain) is shown below.  The division Life has also been added as the largest unit to which all organisms belong.   A further division of species into subspecies and variety is also in use today.

isolated from each other.  The abbreviation var is used and it is not capitalized or italized.  Variety is used for plants but it is not used when referring to animals.

Species   One of the basic units of biological classification and a taxonomic rank.  A species is often defined as a group of organisms capable of interbreeding and producing fertile offspring.

Genus   A collection of related species that share some features but are distinct from one another in some other features.

Family   All closely related genera. The name of families always end in eae

Life   Encompasses all of life

Here is an example of the Linnaean system of classification as we apply it to the Saguaro cactus.  Saguaro is the common name and as is often the case with other plants or animals there could be other common names for the same plant.

Using the binomial system of classification the saguaro cactus has a scientific name, Carnegia gigantea and this cactus can be classified as follows.

It is our hope that the next time you come across a scientific name for a plant or animal  you will be able to better understand why such a system, albeit devised long ago, is still very much in use today.

Biology the Unity and Diversity of Life, Third edition by Cecie Starr and Ralph Taggart. 1978